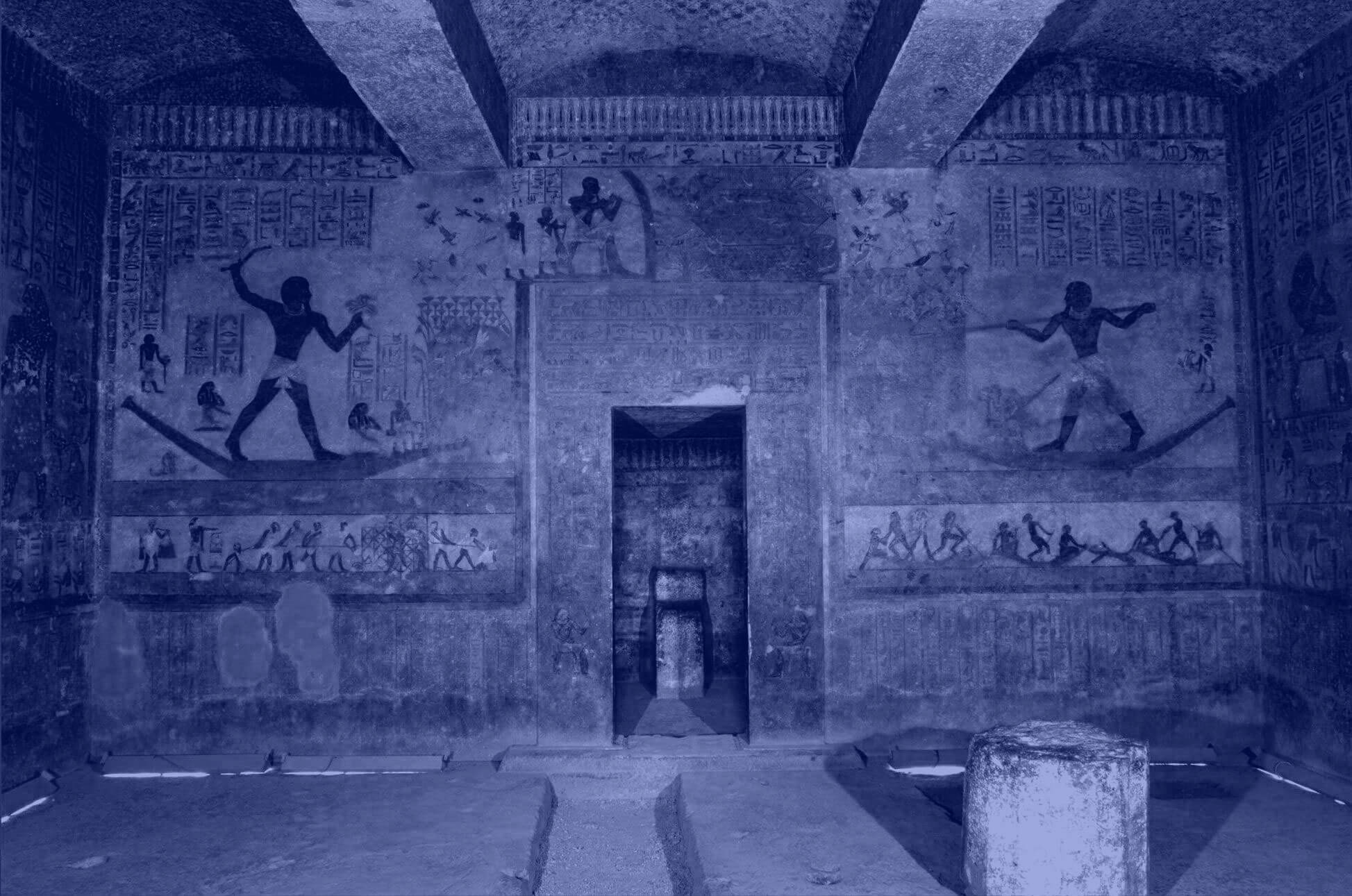 The first known evidence of the use of cryptography is found in an inscription carved around 1900 BC, in the main chamber of the tomb of the nobleman Khnumhotep II at the Beni Hasan cemetery sites. The replacement of standard hieroglyphs with more unusual ones by the scribe at Beni Hasan has longer perplexed cryptographic historians. While the transformation does not hide or encrypt meaning, it did alter meaning to a degree of intention. It is here, at least in the historical record, that the journey towards true cryptography - and thus Bitcoin - begins. 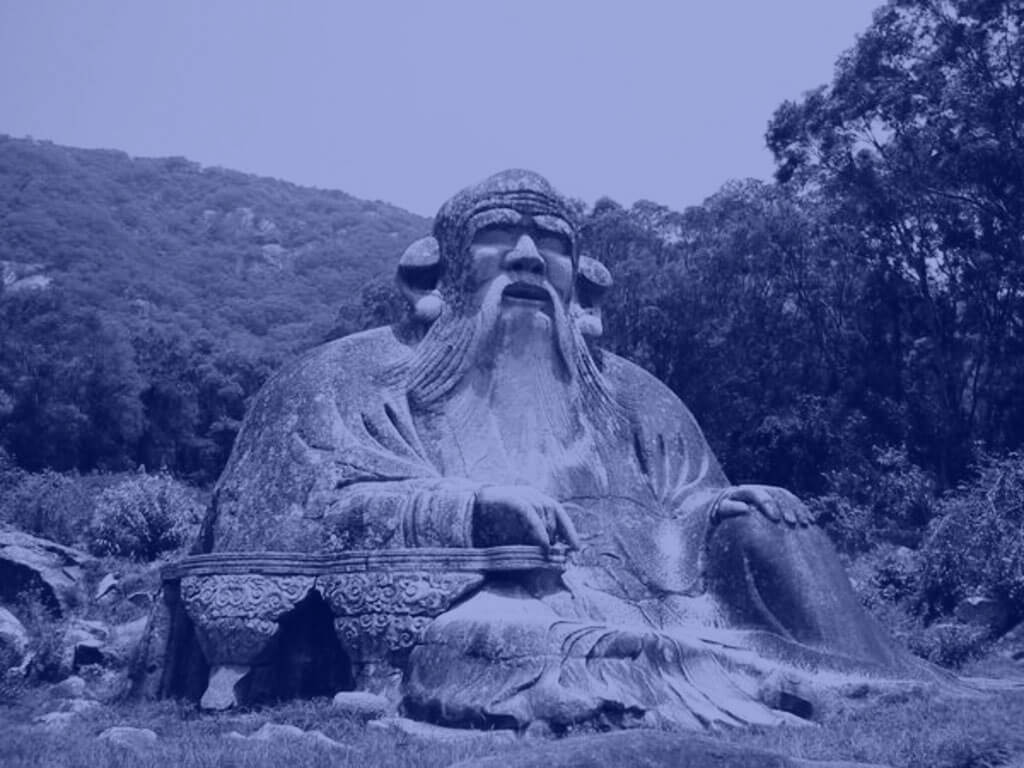 “It’s very attractive to the libertarian viewpoint if we can explain it properly,” wrote Satoshi Nakamoto in 2008. Going on to acknowledge that he “was better with code than with words”, Bitcoin’s founder himself draws a direct link between the Bitcoin project and the libertarian school of thought; as well as the wider utopian relationship between technology and anti-government school of thoughts.
Argued by many political historians as the first true libertarian, Laozi, the sixth century Chinese philosopher and founder of Taoism, symbolises many of the philosophical underpinnings behind Bitcoin. Semi-legendary, the life and identity of Laozi remains a subject of intrigue and dispute - ultimately drawing light on how mythologised identities are developed through history. 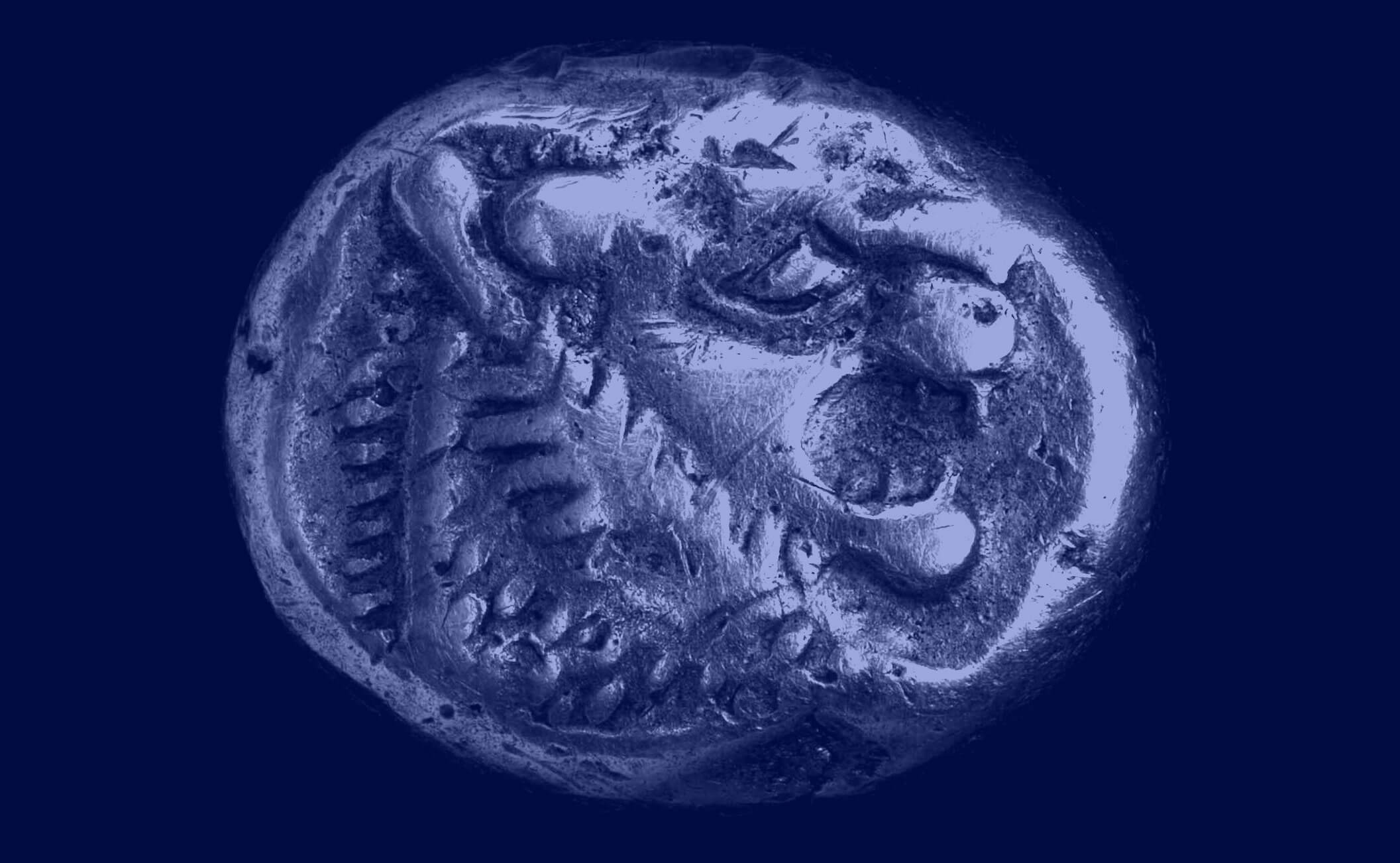 The Tumulus of Alyattes
Lake Marmara, Turkey
560BC

The Lydian stater was the first coin officially issued by a government in world history and was the model for virtually all subsequent coinage - both physical and to a degree digital. Issued by King Alyattes of Lydia (c. 610–560 BC), the coins were made of electrum - a gold and silver alloy. The early development of a token currency back by the intrinsic value of their component parts, and stamped with a seal, places Bitcoin much closer in structure to the Lydian stater than the many fiat currencies of today. 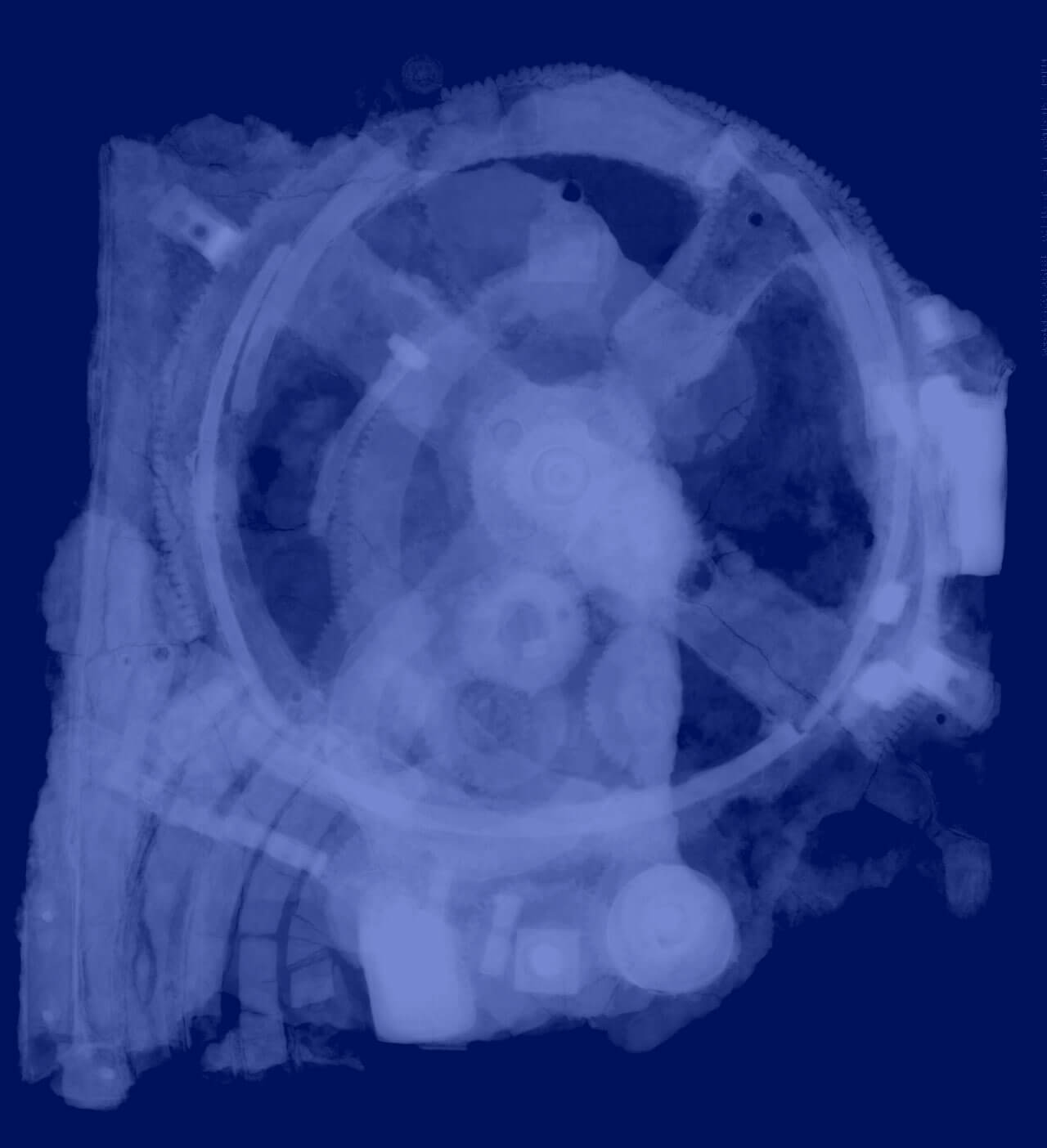 Constellations, network structures, revolutionary methods of computing - a mediation on the Antikythera Mechanism reveals many of its intertwined histories with Bitcoin. Found within an ancient shipwreck off the coast of a Greek island over a century ago, the Antikythera Mechanism remained unidentified for its true form for over seventy-five years, until the work of Princeton science historian Derek J. de Solla Price proposed it’s true nature, “The mechanism is like a great astronomical clock ... or like a modern analogue computer” he noted. This emphasis on revolutions in our understanding of both time and computing bears close similar with Bitcoin, itself a revolutionary index of time. 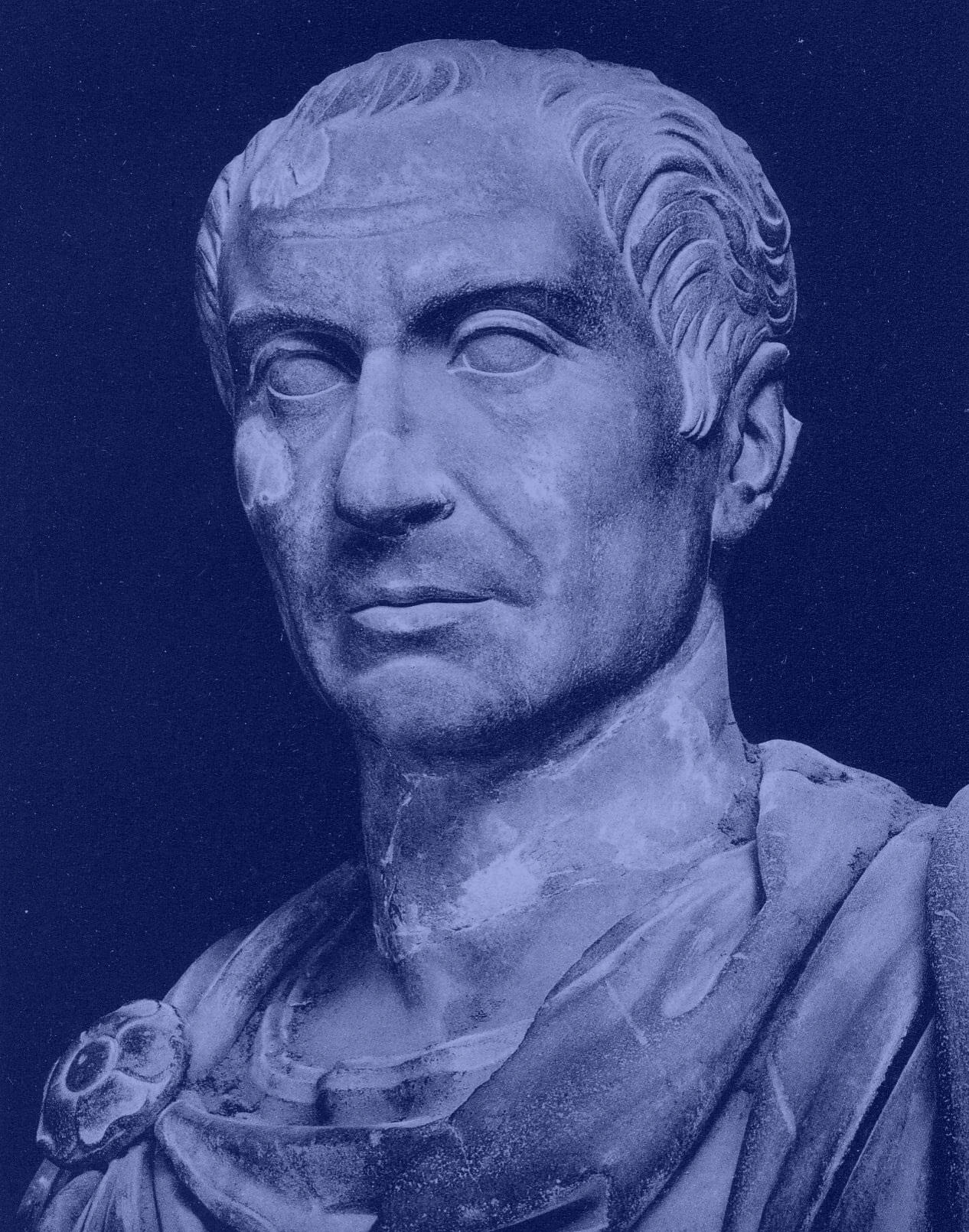 “If he [Julius Caesar] had anything confidential to say, he wrote it in cipher, that is, by so changing the order of the letters of the alphabet, that not a word could be made out. If anyone wishes to decipher these, and get at their meaning, he must substitute the fourth letter of the alphabet, namely D, for A, and so with the others” 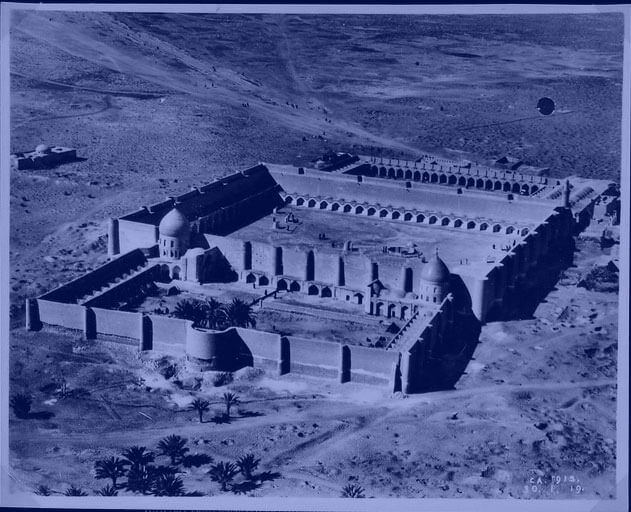 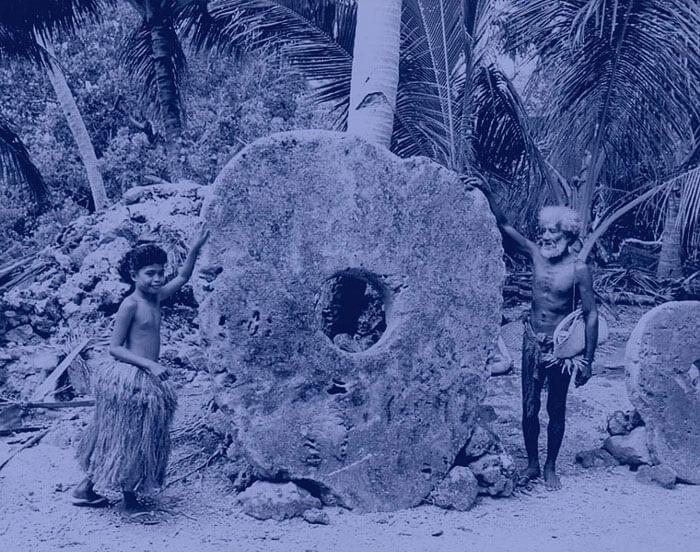 There is always something of the old in the new. The idea of consensus driven, decentralised ledger technology as an architecture for sound money is not new, but rooted in the ancient past. Seen in the context of the Rai stone - the currency of the Yap people - Bitcoin seems less like a radical break with the past, but more a new way of doing old things. The stone money of the Yap, a small island in the Caroline islands, has been remarked upon by many economic anthropologists as displaying disarmingly similar architectural attributes to cryptocurrencies. Both systems, separated in time by millenia, share an architecture based on rarity, resource intensiveness, both using distributed ledger systems to record ownership and digitise the transferal of funds from one party to another. 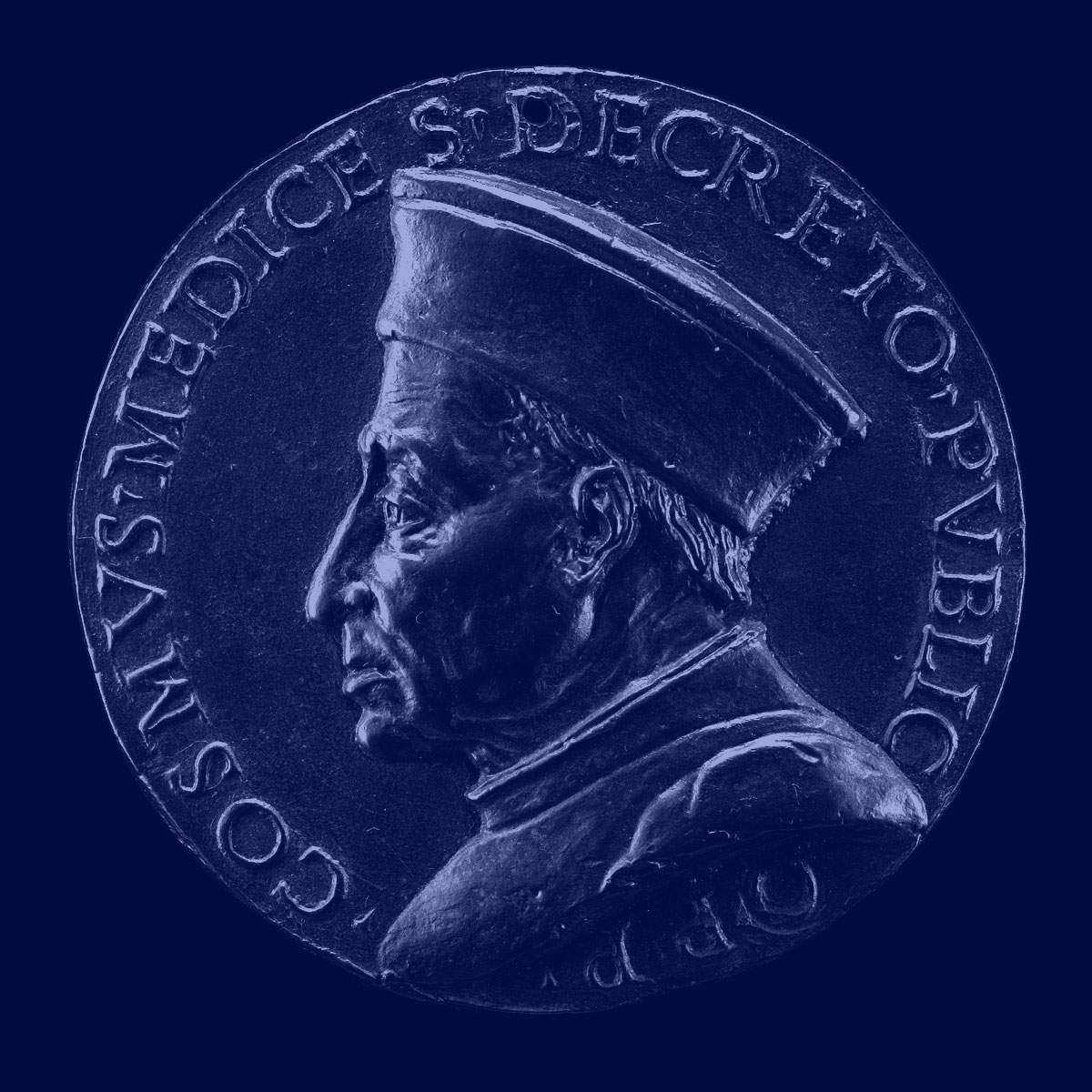 Built in 1457, the Villa Medici in Florence sees the intersection of two important figures in both cryptography and banking during the Renaissance. Designed Leon Alberti Battista (1404 – 1472), it is likely he developed the polyalphabetic cipher during his time working on the country home for the Medici family. Published in De cifris in 1462, the polyalphabetic cipher has the most significant advance in cryptography since the time of Caesar and would among other inventions go on to deem Alberti, the ‘father of Western cryptography’ by cryptographic historian David Kahn. Home to the Medici family, the Villa Medici acts as a forum to reflect on the intersection of the radical transformations in the banking industries led by the Medici and the cultural and artistic flowering that they patroned. Reflecting on the Medici family’s continued historical presence casts a warning to the blockchain community that they ignore culture and the arts at their peril. 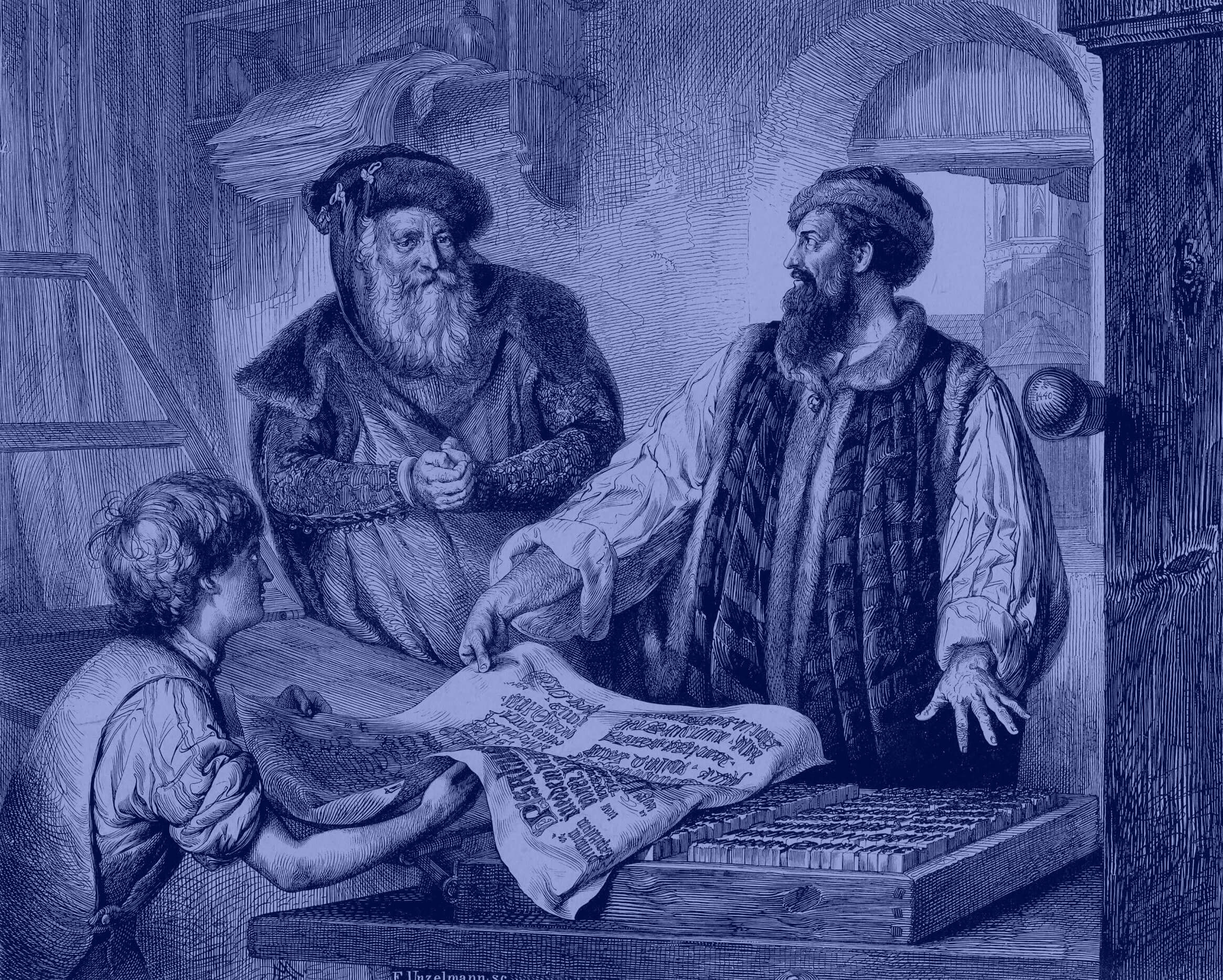 The blockchain as a radically new form of publishing and distribution of information draws many comparisons with the advent of Gutenberg’s printing press. Itself a catalyst for the development of the Renaissance and the Age of Enlightenment, Gutenberg’s invention radically recast access to information and thus power - moving power from centralised, institutional elites to wider communities across Europe. The result - a political and cultural flowering of unrivalled proportions in human history. Whether blockchain recasts the sharing and power hierarchies of information in a similar manner to Gutenberg’s press remains to be seen. What is undeniable is the similarities in the reactions to both technologies. Separated by over half a millenia, the reactionary regulation and media war waged by the centralised banking system chimes with the story of Sultan Bayezid II, King of the Ottoman Empire who issued a decree banning the press from his realm. The result - the first Arabic printing press set up in the Ottoman Empire came into operation only 250 years later, granting Europe a headstart in the decentralisation of knowledge by over a quarter of a millenia. It was a supremacy matched by the rise of Orientalism and the decline in the power of Ottoman and Arabian peninsulas for many centuries to come. While wariness of new technology is vital to its success and proper implementation, refusal to engage with it is rarely positive over the long term. 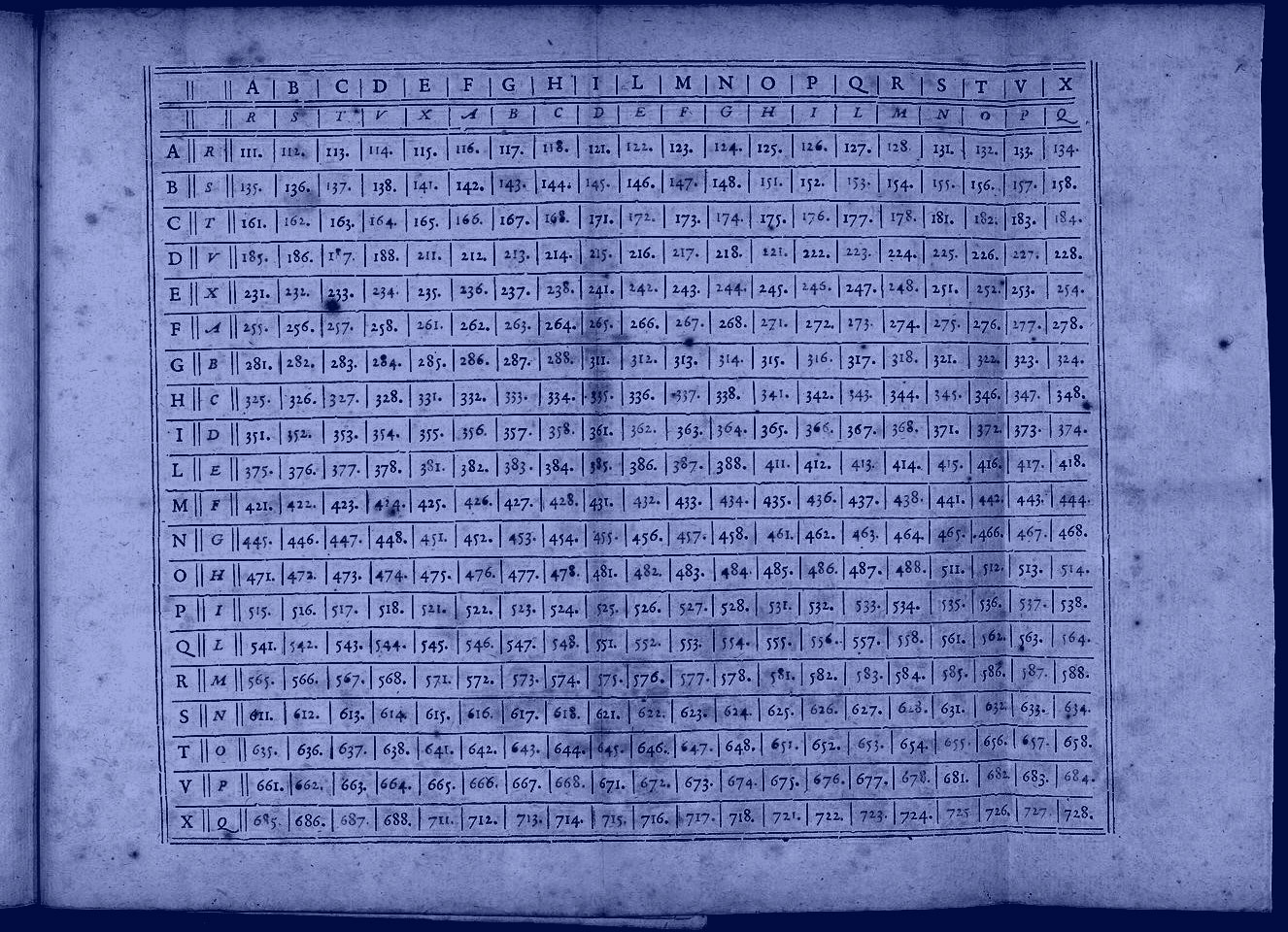 Unbreakable for over three centuries, the story of the Vigenère Cipher cautions a warning to contemporary blockchain technologists. Maximalists naive in their resolute conviction in blockchain’s security must remind themselves of the Vigenère cipher eventual collapse to future cryptanalysts. While there is no doubting blockchain’s security in both the contemporary moment and the near future, time has a way of proving the unprovable. Named le chiffre indéchiffrable, the Vigenère Cipher eventual collapse to the wimes of cryptographic time mirrors another misattribution in the cipher’s history which bears equally on the history of Bitcoin’s founder. Named the Vigenère Cipher, the name masks the true identity of its founder - Giovan Battista Bellaso, a little-known Italian cryptographer now unrecognised for his major role in the history of modern cryptography.

Portraits of a Mind

A 5,000 year history of Bitcoin
A portrait of its founder

Each of the 40 paintings in Portraits of a Mind relates to a unique location in the world, inscribed via a set of co-ordinates found in each painting’s codebase.

Together, this network forms a global history of the world’s first cryptocurrency and a surrogate portrait of it’s founder. 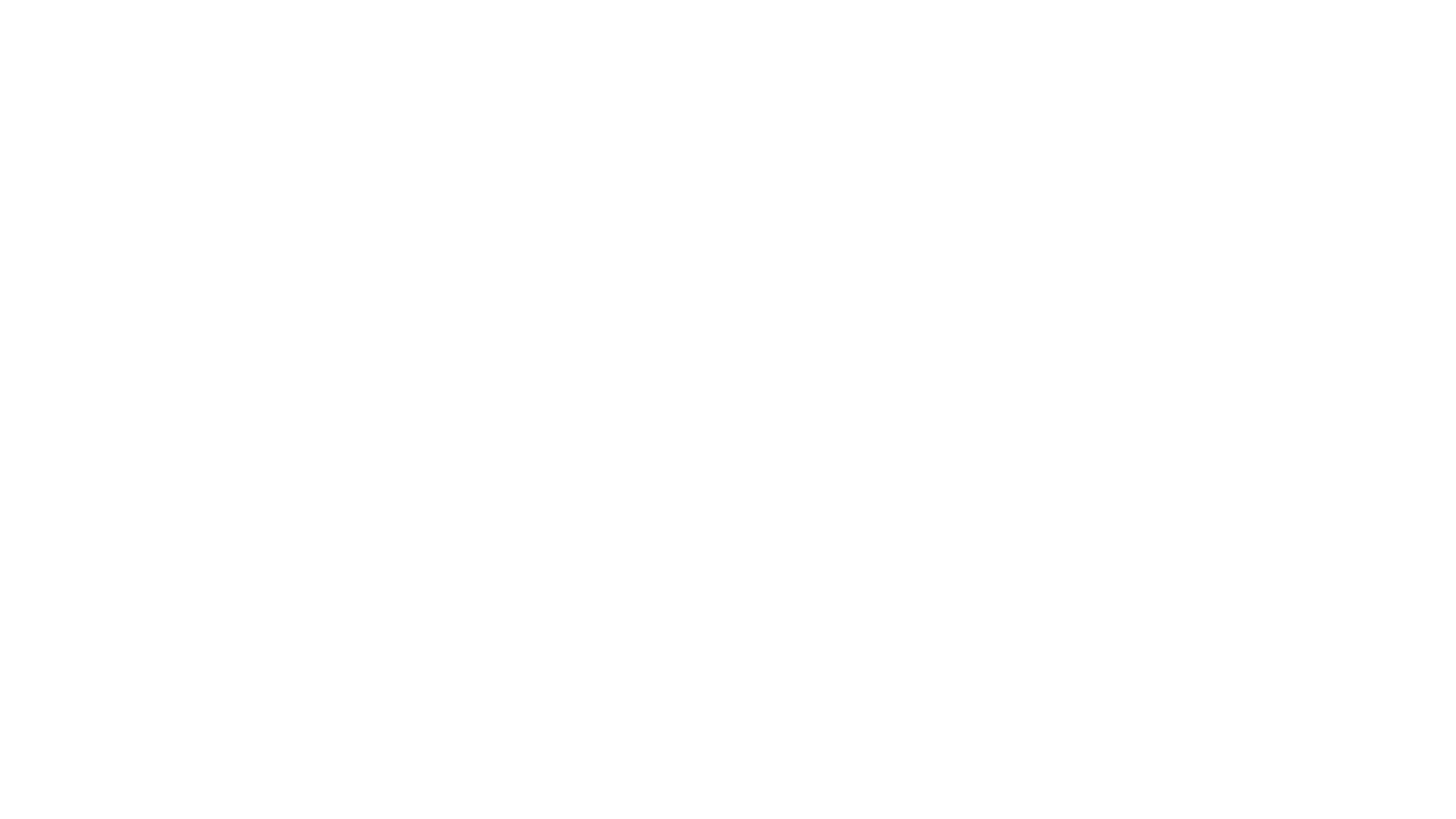 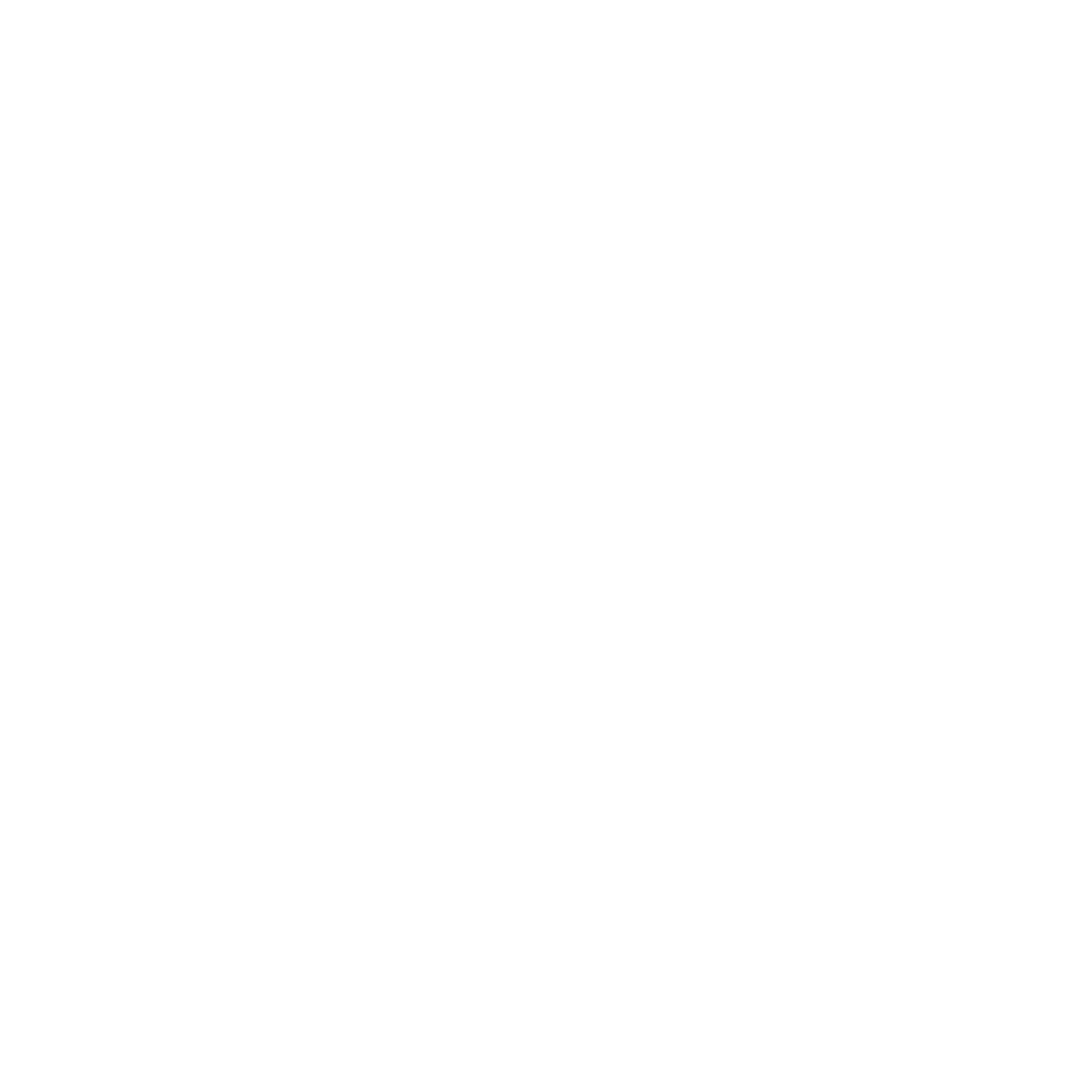